Our servers collected the tweets, the data has been crunched and the report written and it’s up in the Amazon kindle stores of the US, the United Kingdom and Germany and so ladies and gentlemen we once again bring you a detailed analysis of an event hashtag; in this case it’s Orlando, Florida and #InfoComm11, #IC11, #IC2011, #InfoComm2011 and #InfoComm. 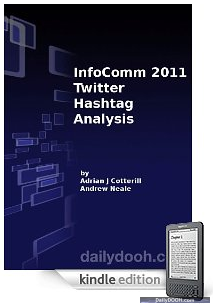 Available in US, UK and German kindle stores

The report retails for EUR 5,18 or USD 7.36 or GBP 4.61 depending on whether you buy it from the German, US or United Kingdom Amazon kindle store.

Remember that if you don’t have an actual Kindle device, Kindle reader apps can be downloaded for Android, iPhone/iPad, Windows Phone 7, Blackberry in the US and for PC and Mac on Desktops – one of the reasons why we chose to publish using Kindle and not some other mechanism!

This entry was posted on Monday, July 4th, 2011 at 13:34 @607 and is filed under Scuttlebut. You can follow any responses to this entry through the RSS 2.0 feed. You can leave a response, or trackback from your own site.