The Evolution Of Face Recognition

OLAM Development Group LLC, which partnered with Airborne Biometrics Group, Camarillo, California, to integrate the FaceFirst System with Signapse Solution for homeland and other security situations, is now out marketing the system. 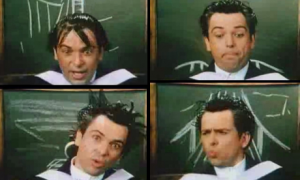 I want to be your sledgehammer

FaceFirst identifies multiple faces in live video stream. This system allows for the Immediate identification of known offenders or terrorists in public spaces.

Airborne Biometrics Group was established to provide much needed products to the security industries. ABG has invested substantially in the development of the FaceFirst product that enables customers to automatically capture and compare facial images in a crowd such as an airport or a major event, or at a military establishment.

It is infinitely expandable throughput of 1 million comparisons per second per server and it uses commodity 1.3 megapixel cameras which can be fixed installations or mobile phones – we actually checked on this because it seemed unlikely, but technical people unrelated in any way to the project assured us it’s possible as long as each face is shrunk to the lowest resolution. Ed.

It works over secure networks, the web and wireless networks.

The system isolates faces photographed by video cameras at entrances and pinch points; or by cell phones. (It could well be leveraged by cameras contained in digital signage connected to security services.)

It then instantly matches these faces to watch list photographs, and sends automatic alerts to cell phones, cash registers, computers, or whatever devices are specified. The user can choose from its own watch list of people it wants to identify.

The system has proven accuracy we are told. Its technology has been top-rated by the 2006 Facial Recognition Vendor Test conducted by the National Institute of Standards and Technology, a U.S. government agency. It has also been listed on the 2010 US Department of Defense Approved Products List.

Of course, special care must be taken if faces are obscured by hats. sunglasses or the like.

OLAM and Airborne claim that its over-the-air installation through public and/or secure networks lowers deployment costs.

This entry was posted on Tuesday, July 5th, 2011 at 07:00 @333 and is filed under DailyDOOH Update. You can follow any responses to this entry through the RSS 2.0 feed. You can leave a response, or trackback from your own site.