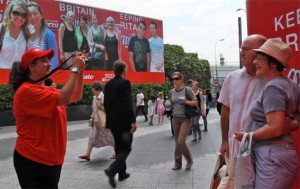 The experiential outdoor campaign forms part of Colgate’s “share a smile” project to raise money for the children’s charity, Barnado’s.

Ocean Outdoor’s premium Eat Street full motion screen dominates the main pedestrian walkway into Westfield London and, as an extension to their existing campaign, allowed Colgate to invite hundreds of Saturday shoppers to smile on camera and then almost immediately make their star appearance on the giant billboard which is normally the preserve of models, recording stars and big brand advertisers.

Colgate aims to capture one million smiles this summer and has pledged to donate GBP 100,000 to Barnado’s when it reaches that target.

Sam Coleman, Communications Director, MEC Global, said: “Colgate’s most recent campaign required members of the public to interact with the campaign. Ocean’s Eat Street digital platform enabled almost immediate interaction to occur, creating an exciting proposition for consumers to get involved and therefore enhancing engagement with the brand itself. It was a great success.”

The campaign was created by VML London and digital was planned by Kinetic. Photographs uploaded by people to Colgate’s Facebook page are also being selected and displayed on digital outdoor screen across London, Birmingham and Liverpool we understand.

This entry was posted on Tuesday, July 5th, 2011 at 16:23 @724 and is filed under DailyDOOH Update. You can follow any responses to this entry through the RSS 2.0 feed. You can leave a response, or trackback from your own site.