Giant new LED-illuminated digital billboards being seen in the Miami area are causing more than a few debates because there’s a question of whether the city may have flouted laws by allowing them. 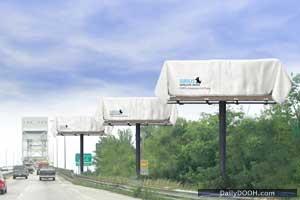 According to Miami newspapers, Miami is cash-starved so has aggressively adopted new ordinances and lucrative agreements with advertising companies that could transform Miami’s expressways. Already there are several
ClearChannel digital boards that many people believe are the beginning of a trend that could see a flood of similar boards along all the main highways.

If the city’s push succeeds, “It would effectively reverse 40 years of public policies that limit the number and placement of billboards along expressways within city limits – restrictions intended to safeguard views of Miami’s skyline and natural landscape,” to quote Miami Herald paper.

Apparently, a big obstacle is that many of the signs appear to violate state, federal or Miami-Dade County rules that govern outdoor advertising.

To quote the Miami Herald, “Last month, the Federal Highway Administration disallowed the 2007 city ordinance that permitted 35 giant ad banners, to be festooned over buildings in and around downtown – including the city administrative center and The Miami Herald building. The decision came as the city seeks county approval to double the size of the city’s designated mural zone by expanding it west of I-95 and along the Dolphin Expressway.

“And the state’s chief billboard regulator concluded the digital ‘media mesh’ hung across the front of the Miami Heat’s downtown arena, a sign authorized by the city, violates state and federal restrictions. The regulator, the Florida Department of Transportation’s John Garner, has also cast doubt on the legality of a developer’s city-backed proposal to erect a pair of 40-story-plus digital ‘media towers’ in the Omni district by the Arsht Center for the Performing Arts.”

Miami has reportedly signed agreements with ClearChannel and two other billboard companies, giving them the right to erect new expressway signs.

The federal rules, enforced by the state of Florida, limit the number, size and type of billboards within 660 feet of a designated roadway. County rules apply inside all municipal boundaries, but enforcement is left up to the cities and towns – some of which, like Miami, have adopted local sign policies that may not conform with the county or federal rulebooks.

Billboard opponents contend that local officials are often unwilling or unable to enforce the rules. And, says Miami Herald, billboard companies often absorb fines or engage in prolonged legal contests over illegal signs while taking in large sums from advertisers.

Billboard critics call them blight and visual pollution, but city leaders say their embrace of outdoor advertising has been prudent, limited in scope and fiscally and legally necessary. The agreements with the ad companies require them to take down multiple signs in city neighbourhoods in exchange for each new billboard erected along the expressways, with the precise ratio varying by company. The digital images can’t change any faster than every eight seconds and cannot flash or be animated. The city is also allowing billboards in parks, where as landlord it can charge big lease fees.

Moreover, rules adopted in the 1990s on electronic commercial signs, the precursors to LEDs, limit them to developed properties of at least 10 acres and bar the advertisement of goods and service not found on the premises – conditions few, if any, of the ClearChannel billboards meet.

ClearChannel and other billboard companies have been rapidly installing LED billboards across the country, including other parts of South Florida. The county has not taken any action on the LED signs because the city has asked the county commission to amend its ordinance to allow them, arguing the rules should be brought up to date to accommodate new technology.

This entry was posted on Monday, July 11th, 2011 at 10:00 @458 and is filed under DailyDOOH Update. You can follow any responses to this entry through the RSS 2.0 feed. You can leave a response, or trackback from your own site.