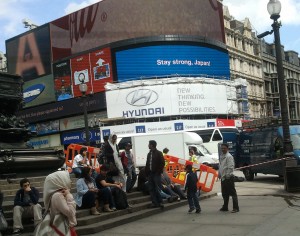 56 million people pass by Piccadilly Circus each year and a photo of its lights is surely a must have in any tourist’s album? Only three times were the lights of Picadilly Circus switched off: during World War II, when the whole of London went dark, November 1965, for Winston Churchill’s funeral and at the funeral of Diana Princes of Wales.

But as we have pointed out before, see Adrian’s article ‘Kein Mehr Schimmernd Neon Licht’ very soon, the traditional neon lights that have ever so slowly been replaced by LED screens, will be nothing but a memory.

The last of the neon signs in Piccadilly Circus is now gone. A white sheet reading Hyundai (see the picture above) is covering the space that the Sanyo sign used to occupy. 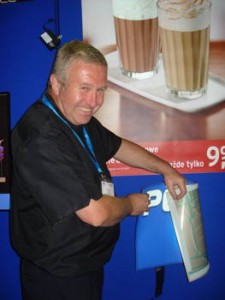 Neon signs are a dying art form, but a new one is emerging that works on similar animation principles, is high resolution and can be powered on batteries.

It can be easily mass produced with minimal human intervention and it looks good though it works along similar principles as Neon. It is also relatively cheap and can have many applications. First time I saw this was at #mwl2011.

Nick Filed,  the company’s director, explained that they have managed to bring the power consumption of the posters down to 12 volts – from previous 240 volts.

If we consider what was said at @kineticww’s #fooh (future of OOH conference) about mobile phones being the real digitisation driver, then maybe we no longer need to put complicated screens on the street to deliver a message to customers? 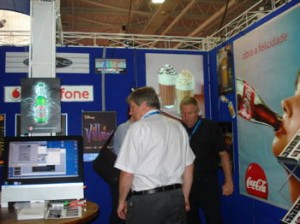 Having an attractive eye catching photo or animation together with your mobile being able to perform image recognition would be enough for an advertiser to deliver his message in full motion. You will only need to point the phone which will recognise the image and bang, see the ad online on your phone. And take it home with you if you like!

Soon we will also be able to use NFC to purchase on the go, it might even be possible from these kind of posters.

†The name of the company, EL Signs, stands for Electro Luminescence Signs – even though withouth the full stops between the E and the L it sounds like if it should be Fawlty Tower‘s Spanish waiter Manuel giving a name to a signage company.

This entry was posted on Sunday, July 10th, 2011 at 18:15 @802 and is filed under DailyDOOH Update. You can follow any responses to this entry through the RSS 2.0 feed. You can leave a response, or trackback from your own site.