While this isn’t the usual digital out-of-home, we were quite fascinated learning about the special Starlight Spectacular developed as part of the 30th Birthday Celebrations for Canada’s Wonderland, Toronto’s major theme park. 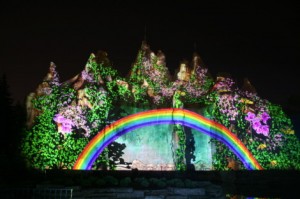 Artists at Tantrum Design & VFX, Toronto, created the vibrant display of stunning visuals that bring the entire mountain, a permanent part of the park, to life every evening for more than 10 minutes.

Using four Christie projectors, the side of the mountain is lit up with constant 2D motion designs and 3D animations that trace the four Canadian seasons, meld into lava spewing, a dragon emerging from the mountain and other colourful scenarios.

“Starlight Spectacular is wowing our guests and is being called one of our best shows in our 30- year history,” says Dave Phillips, vice-president marketing and sales, Canada’s Wonderland. “It’s the perfect way to finish off a great day of thrilling rides and water park fun.” 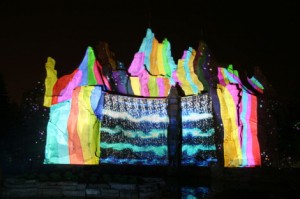 The innovative show, unveiled on June 25 and running throughout the summer, dazzles the senses as Wonder Mountain is transformed by the colourful combination of the 2D motion designs and 3D animations that are precisely mapped and projected onto the mountain, providing the illusion that events are unfolding in front of a live audience. The experience is further heightened by sound effects and an original soundtrack created in association with Apollo Studios, Montreal.

As the primary goal of this project is to entertain, the team at Tantrum was able to showcase their broad skill set and have fun at the same time.

”Usually, Canada’s Wonderland has celebrated with fireworks or a fountain, but wanted something different for its 30th,” says Cheyenne Bloomfield, executive producer at two-year-old Tantrum. “We brought it eye candy.” 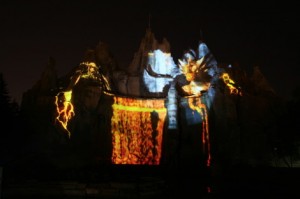 “Our team worked closely together to develop techniques that would deliver the biggest wow factor,” says Dominik Bochenski, creative director, Tantrum. “Wonder Mountain became our canvas and we worked closely with its form to ensure that each effect felt as if it was happening in real-time in front of the viewer’s eyes.”

This project has also been a rewarding one for Tantrum. “As we typically work on television commercials, people watch those at home so there’s no immediate gratification,” says Bochenski. “But to be there at the park in the crowd while they are cheering, whistling and applauding is truly special.”

This entry was posted on Wednesday, July 13th, 2011 at 10:05 @462 and is filed under DailyDOOH Update. You can follow any responses to this entry through the RSS 2.0 feed. You can leave a response, or trackback from your own site.