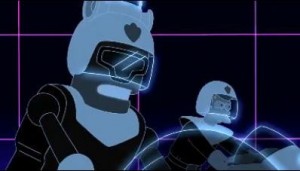 Neither of them have anything much to f***ing do with digital signage, digital out of home, SoLoMo or indeed the future of advertising.

Thursday afternoon @neoadvertising tweeted “Minority Report Mall Scene http://t.co/2eTnhox via @youtube” and earlier in the week we had to head off the moderator of #smics2011 in Monte Carlo from putting ‘Minority Report’ up as some kind of bellwether.

Now whilst the ‘advertising wall’ that sensed Tom Cruise’s character approaching and responding seemed prescient (it conveniently ignored everyone else in the crowd by the way) the continual use of the term (lazy and misguided at best) means that our ‘intern’ project for the summer vacation is watch the film again and again and précis a rebuttal.

As Dave Haynes summed up nicely for us “my concern is that it suggests what is happening now is or will soon be just like that, when that is not what the video analytics guys actually do. They cannot match faces and ID people because they don’t have the database of faces to use”

No doubt the precogs have already seen this.

This entry was posted on Thursday, July 14th, 2011 at 17:19 @763 and is filed under Scuttlebut. You can follow any responses to this entry through the RSS 2.0 feed. You can leave a response, or trackback from your own site.

3 Responses to “The Minority Report”