Near Field Communications technology arrived on the streets of New York and Los Angeles this week, thanks to a convergent partnership amongst several key communications experts, media, technology and content providers. 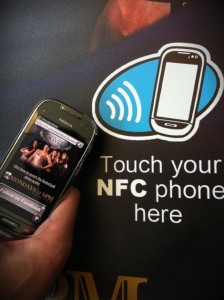 This follows on of course from London (back in May) when we had Posterscope (partnering with Nokia, O2, Proxama and JCDecaux) launching the UK’s first NFC-enabled poster campaign (each site had a pre-programmed NFC chip affixed to the rear of the poster), Ed

The goal of the US test is to (again) illustrate the potential of NFC, testing the usability of the technology and confirming that it is suitable for use in outdoor media sites across the US. – ultimately giving marketers a truly viable means to directly connect with consumers at multiple touch-points throughout their day.

The bus shelter posters promote the newest season of VH1’s hit series Basketball Wives and displays a call to action that invokes onlookers to tap the NFC icon with their NFC-enabled phone to view an exclusive clip of the show.

Behind the scenes, each poster site has a pre-programmed, paper-thin, NFC sticker-like tag affixed to its back. Thanks to the hassle-free usability of NFC, a simple flick of the wrist enables testers to initiate immediate viewing (and eventually a transaction), without the preface of app downloads or cumbersome steps. The technology also dissolves the need for any costly and potentially faulty additional electronics to the poster sites themselves; subsequently streamlining an added dynamic to almost all potential OOH campaigns at the pedestrian level.

NFC is expected by many to set the precedent for one-to-one direct mobile transactions in the U.S., whether for downloading content or for instantaneous purchases. It requires minimal effort to incorporate and execute on the part the marketer, the media owner and the consumer. Due to the paper-thin nature of the tags, the potential for seamless integration into Out-of-Home formats offers an enormous added value in extending brands to consumers. The retail possibilities are enormous.

The only true hardware that is needed for the transactions to occur is an NFC-enabled phone. In this case, Nokia provided the Nokia Astound to all the partners for the test. (It has been sold by T-Mobile since the spring.) Though not yet massively available in the U.S., by the end of 2011, NFC will soon be seen as a de facto standard within most new-edition smartphones.

According to Juniper Research, an estimated one-in-five smartphones will have NFC functionality by 2014, more than half of which will be in North America. More and more U.S. mobile technology providers such as Nokia, RIM, Apple, Google and Sony plan to include NFC in upcoming mobile device releases. Service providers and major banks are also involved on several levels, working to develop a standardized backend mobile payment system to work seamlessly with NFC technology.

Regarding its potential for integration into OOH media campaigns, Martin Porter, vice-president director at Posterscope USA’s Hyperspace division says, “What is so exciting about this new technology is its simplicity, its low cost and the worldwide adoption taking place—all creating large-scale purposeful marketing opportunities that can be easily implemented across the U.S. There are hundreds of thousands of commercially available poster sites that can be instantly enabled with the technology. The potential application of this technology is immense.”

Beyond instant transactions, NFC coupled with OOH also offers advertisers greater opportunities to build truly ‘hyper-localized’ campaigns through tailored content and essentially building direct and personal relationships with consumers as they travel throughout their day.

“From the work we did delivering the NFC marketing campaign for the X-Men movie in the UK, we already know that NFC presents film studios with a great way of promoting their latest productions and engendering closer relationships with customers that not only ‘incentivize’ a visit to the cinema but enable studios to track individual mobile phone users’ subsequent behavior through our TagManager campaign management system,” says Neil Garner, founder and CEO of Proxama. “NFC offers advertisers greater opportunities to build ‘hyper-local’ promotional campaigns using media-rich, high quality content that can only enhance their relationships with their customers.”

This entry was posted on Wednesday, July 20th, 2011 at 08:00 @375 and is filed under DailyDOOH Update. You can follow any responses to this entry through the RSS 2.0 feed. You can leave a response, or trackback from your own site.