Queue The Obama Graphics, And Action… 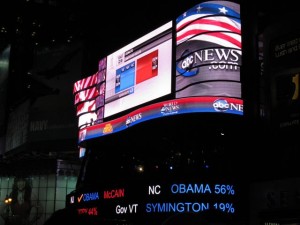 These historic photos were shot around 10pm EST last night, during the ABC News (with a little help from Show + Tell) event, where Times Square was transformed into a massive live and interactive Digital Out of Home showcase.

As you can probably imagine, it was an amazing night! There was an absolutely huge crowd in Times Square, all cheering as the voting results for each state was revealed on the screens. If you were there you would have thought it was New Year’s Eve!

Around 10:45pm EST, I overheard the TV producer tell Jason Ray, our sign operator – “Queue up the Obama graphics” for the announcement at 11pm EST.

For the next 15 minutes I sat in quiet anticipation with Jason and I both fixated on the F11 key on the computer keyboard.

I knew we were both thinking the same thing…

…the person that presses this key will announce to the world the next President Elect of the United States! (or at least the people in the world that were watching in Times Square)

At 10:59, as we waited for the command from the TV producer to launch the graphic. – I fantasized for about 1 second AND seriously considered wrestling the keyboard from Jason’s hands and pressing the button myself!

Thankfully we know you didn’t, Ed 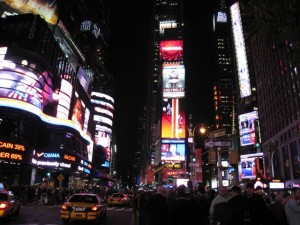 From left to right, ABCSupersign, NASDAQ and Reuters. 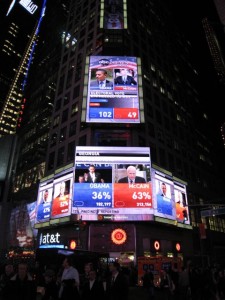 This entry was posted on Wednesday, November 5th, 2008 at 07:48 @366 and is filed under DailyDOOH Update. You can follow any responses to this entry through the RSS 2.0 feed. You can leave a response, or trackback from your own site.

3 Responses to “Queue The Obama Graphics, And Action…”