It’s all about transparency! And an all-out use of social media. 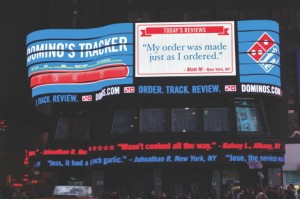 [1]Domino’s Pizza [2] is going full out where many would fear to tread, by running a billboard in Times Square that shows customer comments – good and bad – about its product.

An electronic ticker displays in real-time what consumers really think of the brand. Domino’s Tracker ordinarily allows consumers the ability to follow the stages of an order, as well as the names of who in the store is responsible for every stage – all the way to the delivery driver soon to appear at the door. As a new feature to Domino’s Tracker, consumers now have the chance to give their feedback.

The campaign, which began July 25 and will run until August 23, is being seen on the ABC SuperSign in Times Square. Customer comments are filtered for bad language and appropriateness, but not for what the customer really thinks, no matter whether good, bad or neutral. 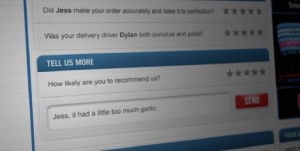 [3]“The feedback helps us and our stores be accountable,” says Chris Brandon, Domino’s Pizza spokesperson. “Many stores follow their tracker feedback in real time, and they will certainly be aware when something from their customers is posted in Times Square.

“We understand that customers’ openness and honesty is the only way we will truly get better. It is worth it to us to risk some negative comments if we learn from it and use it to get better. Our management and franchisees are committed to that.”

Domino’s admittedly had a rough time back in 2009, after a YouTube video surfaced showing rogue employees doing nasty things with the pizza. The incident prompted a YouTube apology by Patrick Doyle, Domino’s CEO.

Since then the company has been working to turn the brand around. Last December, Domino’s and its agency Crispin Porter + Bogusky [4] introduced a new campaign called ‘Pizza Turnaround’, which showed real focus groups describing the pizza’s ‘cardboard crust’ and likening the sauce to ketchup. In the ad, Doyle vowed to do better and introduce a new version of the pizza.

That campaign was a hit, increasing sales by double-digits in the first quarter it ran. Since then, Domino’s has continued to strive for transparency by vowing to use un-retouched pictures of its pizzas in its ads.

Now, to coincide with the new social media billboard, Domino’s and the agency also launched a new national television campaign, starring New York-area Domino’s store managers Jess Hreniuk and Jose Castillo, that shows not only the attention placed on customer feedback in the midst of a busy Domino’s store – but also, the surprise of seeing the comments themselves among the bright lights of Times Square.