For what is believed to be the first time in the U.S., the FBI is using advertisements to further a general investigative priority. 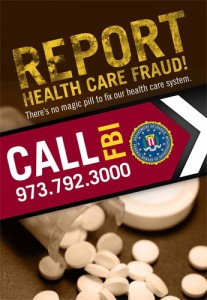 Newark, New Jersey’s FBI agents have launched a campaign on Clear Channel Outdoor that they conceived and implemented to increase reporting of health care fraud.

Four separate ads crafted by the agents with artwork created by Clear Channel Outdoor are being featured on CCO’s digital billboards on Interstates 95, 80, 78, 287, and 280, and in 40 kiosks in 13 malls throughout New Jersey – all to run through September 25.

Each ad targets a different audience. One ad, featuring a mother cradling an infant and targeting women and young parents, reads: ‘Report health care fraud! It hurts more than the government and insurance companies.’

FBI headquarters has designated this as a ‘pilot’ program, meaning the program will be scaled to a national level if it successful. Success will be measured by a significant jump in citizen reporting of health care fraud incidents.

Health care fraud causes one of the largest losses of taxpayer dollars from a government program, with Medicare and Medicaid, as the largest publicly funded programs, targeted frequently. Independent estimates of fraudulent billings to health care programs in the U.S,, both public and private, are estimated at between 3% and 10% of total health care expenditures, representing a $60 billion to $200 billion in losses to fraud each year.

New Jersey’s losses for 2010 were estimated to be $7.5 million – the ninth highest total in the nation.

The FBI is committed to addressing HCF through disruption, dismantlement and subsequent prosecution of criminals who engage in such activity. To date, FBI offices throughout the nation have addressed significant HCF threats through coordinated initiatives, task forces and undercover operations.

Recognizing HCF and knowing where and how to report it a major consideration. The aim of the new health care fraud ad campaign is three-fold: to increase awareness and educate the public about health care fraud; to enlighten the public that it is something that affects each American individually and not some nebulous government problem; and to give people a phone number and a face to talk to about it.”

The program, with the goal of generating an abundance of new leads, is being paid for with HCF program funds from FBI Headquarters.

This entry was posted on Monday, August 1st, 2011 at 17:00 @750 and is filed under DailyDOOH Update. You can follow any responses to this entry through the RSS 2.0 feed. You can leave a response, or trackback from your own site.