If you are in, or traveling to, Toronto, this fall, you may want to take in the Royal Ontario Museum where the Institute for Contemporary Culture will be holding the North American debut of David Hockney’s Fresh Flowers: Drawings on iPhones and iPads. 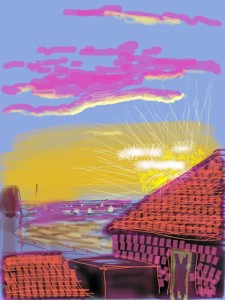 The exhibition illustrates technology’s impact on visual culture, and reveals the artist’s extraordinary use of this novel new artistic medium and its impact on shaping visual culture today. It was originally presented by the Fondation Pierre Bergé/Yves Saint Laurent in Paris.

On view from October 8, 2011, to January 1, 2012, the exhibition features approximately 100 iPhone drawings displayed on 20 iPod Touches, as well as an additional 100 iPad drawings on 20 iPads. More than 20 Hockney drawings in the exhibition will feature playback animations, allowing viewers insight into the artist’s creative process as one views the works being drawn from start to finish.

“Technology has played a major role in how we receive and interpret culture,” says Janet Carding, director and CEO of the Museum. “Fresh Flowers provides the ROM an important opportunity to examine its influence on art and design.”

In 2008, soon after getting his first iPhone, Hockney discovered the Brushes application as well as other apps enabling him to produce works of extraordinary variety. In his early iPhone work, Hockney used his thumb and fingers to create images directly on the device’s screen—modifying colour and hue and layering brushstrokes of various width and opacity. After the introduction of the iPad in April, 2010, Hockney developed a more complex and diverse oeuvre thanks to the tablet’s larger size and the introduction of a stylus.

To date, Hockney has created nearly 1,000 images on his iPhone and iPad ranging in subject matter from flowers and plants, portraiture to landscapes and still lifes.

This entry was posted on Thursday, August 4th, 2011 at 09:00 @416 and is filed under DailyDOOH Update. You can follow any responses to this entry through the RSS 2.0 feed. You can leave a response, or trackback from your own site.