Billed as the ‘world’s most advanced retail store‘ here we see SingTel and leading digital self service specialist Yeahpoint [1] (fresh from TOSHIBA TEC taking a a 12 percent stake in Yeahpoint back in April) launch a groundbreaking multimedia shopping experience to Singapore. 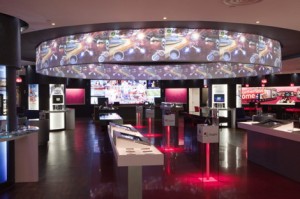 [2]The new SingTel flagship store at the Comcentre in the heart of Singapore’s Orchard Road shopping area is SingTel’s largest, and offers a highly intuitive and interactive digital retail experience.

The centrepiece of the new store is a giant 32-metre circular dual-sided digital display which creates a 360 degree visual experience for the customer. Utilising twenty projectors working in synchronisation (tis centrepiece is powered by Yeahpoint’s yeahWARE CORE9 software platform).

The store is equipped with an extensive array of embedded interactive digital screens in everything from the store’s tabletops, walls and pylons for a more flexible retail experience. With touch screens embedded in its exterior glass walls, the store is effectively open 24/7, maximising consumer reach. Five unique multi-media zones allow customers to utilise interactive technology, within or outside the store, at anytime.

The store also contains a ‘Teach Centre’ which is a round conference room that uses five motorised screens to give a completely 360 degree experience in a business environment. 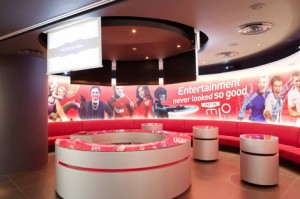 [3]This innovative approach, we are told, facilitates more engaging meetings by ensuring that every face at the table can be seen easily and all participants can clearly view presentations from any angle

Other features of the store include an enormous 15 screen video wall and six 42-inch digital interactive tables which allow customers to listen to music, play games, watch SingTel’s Pay-TV service and try out the latest live handsets and accessories in the store.

SingTel Head of Sales, Ms Diana Chen, believes that this next evolution in retail interaction is set to cause a major buzz in the international retail environment and told us “With the launch of the new SingTel Shop at the Comcentre, we believe that we have set an example for others in the retail industry to follow. We have worked incredibly hard to create something special that will enable us to meet the ever-changing communications and infotainment needs of our customers even better,”

Yeahpoint Chief Executive Officer John Anderson believes that the new SingTel Shop is the best example of the implementation of interactive digital technology into a retail environment available anywhere in the world.

“The giant 32-metre circular display is an incredibly complex device that is able to run as four independent images or a complete 360 degree dual sided display. With the ability to have both stills and seamless animations, it truly has to be seen to be believed.”

SingTel and Yeahpoint won the ‘Best Retail Concept of the Year’ award at the 2009 Singapore Retail Awards for the original SingTel concept store.

TOSHIBA TECis engaged in digital product business of the TOSHIBA group. Expanding its operation for the whole of the world, the range of products is formed by POS (Point of Sales) systems for retail industry, in particular keeping the top market share in Japan, Barcode printing and RFID (Radio Frequency Identification) system for manufacturing, logistic and retail industry, and MFP (Multi-function Peripheral) for the office use. TOSHIBA TEC keeps creating products at any time for efficient business processes and innovated new value with customers in mind.