D’oh! #englandriots Man Hands Himself In

A man walks into a Birmingham Police Station and hands himself in, admitting that he was photo number 23 on the digi-van parked here in central Birmingham!!! 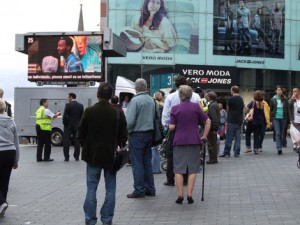 The UK’s West Midlands Police force have within the last 24 hours been using digi-vans from Media Displays to help identify perpetrators from the recent riots in Birmingham.

Operating both mobile and at static locations across Birmingham, CCTV footage and images are being displayed on the six metre LED screen.

Obviously, in addition to providing vital information and targeting areas where the actual crime was committed the use of the digi-vans is presenting a strong message to those who have committed these offences.

Ian Taylor, Managing Director of Media Displays told us “this is an excellent example of mobile digi-vans targeting specific areas, with a highly targeted message. In the last 24 hours, West Midlands Police have received a tremendous level of information in relation to incidents during the riots. With thousands of people expected out shopping this weekend in the Birmingham Bullring, we hope that it won’t be long before the majority if not all of these people are identified and appropriately dealt with”.

The digi-van screens are updated in real time as more people are added to the West Midlands Police Web site, ensuring that Police officers are dealing with those who they still want to speak with and not dealing with people who have already been arrested.

This entry was posted on Friday, August 12th, 2011 at 16:21 @723 and is filed under Scuttlebut. You can follow any responses to this entry through the RSS 2.0 feed. You can leave a response, or trackback from your own site.

One Response to “D’oh! #englandriots Man Hands Himself In”