Media Displays’ digi-vans and Scott Anthony’s SA Group digiadvans (shown below) have been the true out of home (OOH) stars these past few days by helping the Police and the communities they serve bring the English looters to justice. 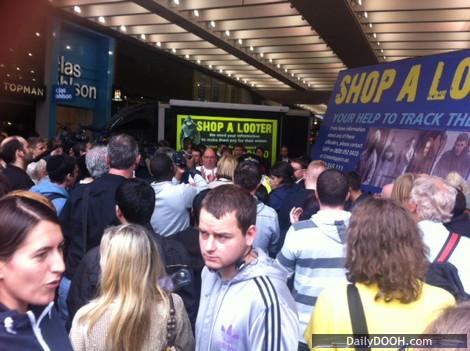 Digi-vans has featured prominently in the UK newspapers with the Grauniad reporting “Looting suspects caught on CCTV paraded on ‘digi-van’” and the digiadvans being a nightly back drop on both the BBC and Sky News channel’s reporting of the disturbances.

It was Digi-vans though that had the first reported instance of man turning himself in after seeing his picture on the screen.

Hats off to both companies.

This entry was posted on Sunday, August 14th, 2011 at 16:37 @734 and is filed under DailyDOOH Update. You can follow any responses to this entry through the RSS 2.0 feed. You can leave a response, or trackback from your own site.