The UK Grauniad newspaper featured this great picture of one of the Media Displays digi-vans (shown below) in a now familiar #englandriots story entitled ‘Looting suspects caught on CCTV paraded on ‘digi-van’: Police hunt those involved in riots by displaying footage of crimes on a mobile screen in Birmingham city centre‘ 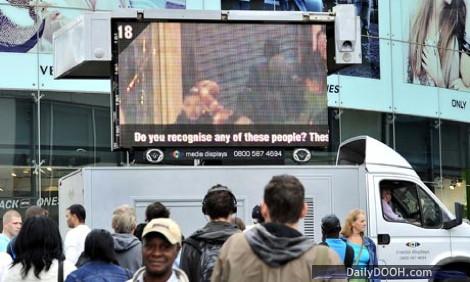 It described the “digi-van” as having a 6m square display unit.

This entry was posted on Saturday, August 13th, 2011 at 10:30 @479 and is filed under Scuttlebut. You can follow any responses to this entry through the RSS 2.0 feed. You can leave a response, or trackback from your own site.

One Response to “Looting Suspects Paraded On ‘digi-van’”