This was certainly a case of targeting ultimate users.

Available to select VIP fans attending the Rogers Cup tennis tournament presented by National Bank in Toronto and Montreal, the unique application offered a number of powerful features to create a more visually exciting, informative, and interactive tournament experience, all at the touch of a finger.

The best men and women in tennis battled it out at the Rogers Cup presented by National Bank in Toronto (women’s tournament) and Montreal (men’s tournament), culminating with the final matches on Aug. 14.

Beginning with the semifinals on Aug. 12, the X2O Rogers Cup Experience BlackBerry PlayBook app was made available to select VIP guests in the Cisco Systems hospitality suites at the Toronto and Montreal tournaments. With the application, watching live videos of Cup matches and game highlights was only the start. Users could access all match scores, view player profiles, follow and send tweets on the action, and even view live weather feeds with radar maps. 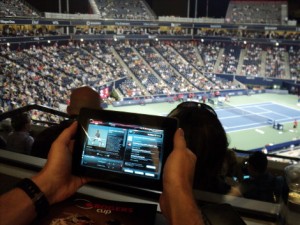 In addition, fans were able to interact with a large-screen version of the app on digital touchscreens displaying the same content available on the tablets. The first thing guests saw as they walked into the suites was the large touch screen running similar content to the PlayBook app. They would stop and interact with it, then take their PlayBook to their seat and pick up where they left off as they watched the match.

We asked David Wilkins, X2O’s president and CEO, why the company did such work for such a short-term event.

“The entire purpose of the app was to showcase X2O, Research in Motion, and Cisco technology working in tandem, so from that point of view I believe all parties felt it was very worthwhile,” says Wilkins. “The goal was to demonstrate an innovative use of the latest real-time technologies to provide an enhance experience during the live Rogers Cup event. It was interesting to see users sitting in their seats, watching the matches, and using the X2O app to call up player stats and watch live video of other games. This was the first year the men’s and women’s events were held at the same time, so if you were watching the men’s event in Montreal you could also watch a live feed of the women’s event in Toronto directly on your BlackBerry tablet.

“The Rogers Cup has a long and proud history in Canada, so we really wanted to bring something special to the event. This tablet app was the ultimate companion for tennis fans, taking the game to a whole new level with live videos, player information, social networking, and much more. We took our visual communications beyond the large-format display, making the X2O Rogers Cup Experience an interactive and social one.”

The app stays on the Blackberry’s that were given out to Cisco’s VIP, guests at the event, and becomes a showcase for X2O’s real-time communication platform.

“It still has a live connection back to our servers, so we can continually provide updates and use it a marketing vehicle for X2O’s latest news,” says Wilkins.

Since the app was built using the mobile version of X2O’s NITRO engine, it can run on other platforms as well, such as the iPad and the Motorola Xoom. But RIM provided complimentary BlackBerry’s to guests in Cisco’s hospitality suite, so that was the primary target for this event.

This entry was posted on Tuesday, August 16th, 2011 at 10:00 @458 and is filed under DailyDOOH Update. You can follow any responses to this entry through the RSS 2.0 feed. You can leave a response, or trackback from your own site.