The blogosphere has been buzzing in the last couple of weeks about fake Apple Stores popping up in China and making a nonsense of President Obama’s overtures to nudge the Chinese into respecting intellectual property. 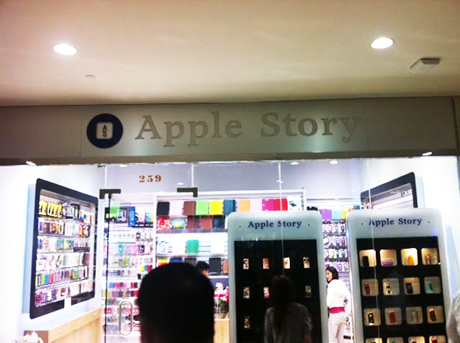 The web-site of the ‘birdabroad’, who first wrote about the phenomenon was inundated with visits – 1,000,000 views in less than 72 hours – and the author was contacted by every major news source in the US and Europe, including the AP, AFP, CNN, BBC, ABC, NBC, and “other similarly acronymed outfits.”

Meanwhile however, in Queens New York, Greg Autry (no relation to Gene) snapped this very appealing “Apple Story” in Steve Jobs’ back yard (shown above).

For those of you who missed the furore so far, here is the undercover video posted on YouTube:

What’s the link to DOOH? Not much really apart from don’t trust big brands !

This entry was posted on Monday, August 22nd, 2011 at 21:15 @927 and is filed under Scuttlebut. You can follow any responses to this entry through the RSS 2.0 feed. You can leave a response, or trackback from your own site.