theBITE Serving Up US Open Coverage

indoorDIRECT and Tennis Channel have made an agreement to air Tennis Channel’s coverage of the 2011 US Open on indoorDIRECT’s in-store television show, ‘theBITE’, reaching 150 million consumers annually in the nation’s top quick-service restaurants. 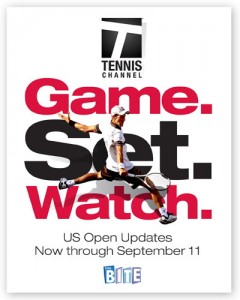 Each day during the US Open, Aug. 29–to-Sept. 11, theBITE will feature news and daily highlights from the US Open. The entire first week of the US Open coverage on theBITE will be aired with exclusive Tennis Channel branding and messaging throughout the day.

“We are thrilled to be able to generate a high level of awareness for the Tennis Channel’s coverage of the US Open by creating an integrated theme week,” says Jonna Birgans, vice-president of strategic alliances at indoorDIRECT. “Theme Weeks are a way for special events, such as the US Open, to be featured prominently within our programming and our viewers love to keep up with big sporting events.”

Robyn Miller, senior vice-president of the Tennis Channel, says that indoorDIRECT helps to generate awareness for Tennis Channel’s US Open coverage. “It has been an invaluable marketing partner in past initiatives, literally helping to put our brand in front of millions of people around the country,” he says.

theBITE has been a long time programming partner of Tennis Channel and regularly features Tennis Channel’s Court Report, which highlights the latest news and updates from the Tennis world. theBITE is a one hour magazine-style show that is seen in the nation’s top quick-service restaurants – including Taco Bell, Wendy’s, Denny’s, Carl’s Jr., Hardee’s, McDonald’s, KFC and Arby’s. – and features short bites of entertainment, sports, music and lifestyle segments that’s updated weekly. Free Wi-Fi is currently being provided to customers in select locations and plans are underway to expand free Wi-Fi access nationwide.

indoorDIRECT is a privately held company based in Dallas with additional offices in New York and Los Angeles.

This entry was posted on Friday, August 26th, 2011 at 10:00 @458 and is filed under DailyDOOH Update. You can follow any responses to this entry through the RSS 2.0 feed. You can leave a response, or trackback from your own site.