There are literally dozens of industry events during September and October. From our events calendar (no-one out there – not even the industry associations have one of these you know) here’s a closer look at everything happening in September … 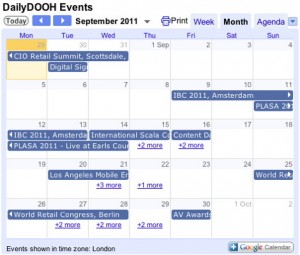 Friday 9th September sees the month kick off with IBC 2011 in Amsterdam.

Overlapping that somewhat is PLASA Live at Earls Court in London which starts on Sunday 11th.

That same week sees Scala’s International Conference in Amsterdam starting on the 14th and 15th and also (again unfortunately overlapping) the 5th Digital Signage conference in Munich on the 15th.

Friday 16th September sees our very own Content Day in association with BlueFox, also in Munich.

The Los Angeles Mobile Entertainment Summit is on the 20th and 21st. The 21st and 22nd see the Retail Technology Summit in London. The 21st also sees the Ad Club of Toronto: The Great Outdoors event in Toronto and APC Display’s Bletchley Park One Day Workshop in the UK.

The 25th to 28th sees the World Retail Congress in Berlin. The 27th sees the first NFC Bootcamp in New York.

This entry was posted on Tuesday, August 30th, 2011 at 06:45 @323 and is filed under DailyDOOH Update. You can follow any responses to this entry through the RSS 2.0 feed. You can leave a response, or trackback from your own site.

One Response to “The Month Ahead (September 2011)”