Are You Ready For The 21st Century Shopper?

In the U.K., 96% of adults are members of loyalty programs, but most of these people say that they’d still shop in the same stores even if they didn’t have a loyalty program 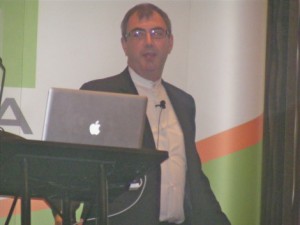 It’s one of the many facts, figures and examples put forward by Jim Crawford, executive director of the Global Retail Executive Council and principal of Taberna Retail, Seattle, Washington, at the welcome dinner of the CIO Retail Summit Sunday night in Scottsdale, Arizona.

Asking the Summit delegates whether they were ready for the new shopper, Crawford threw them such facts as:

Crawford pointed out the huge growth in mobile, mentioning that he bought 92% of his Chistmas presents online last Christmas, not only because of convenience and price but also because of the delivery service.

“Along with the ‘social’ revolution, mobile changes everything,” he said. “And people shop all the time: at home, at work, on their tablets, on the go – and they’re always looking for information. Stores have to be different, too, so they know how to respond. It’s all about innovation.”

Noting how technology has to engage the customer, Crawford used several examples. One was a wall calendar produced by Audi, with no photos of cars. But when a viewer engaged it with a smart phone, a car would appear in the scene. Further, when a new model would be launched, it would happen within the setting as well.

He also showed how a Japanese promotion involving chasing and capturing virtual butterflies influenced campaign by New Balance that offered a prize to the value of $20,000. Another product praised for innovation was Digital Paint which involves projections onto buildings.

Crawford ended his address with comments on capturing innovation, one of which was a line I’d never heard before: “Organization sites are innovation killers.” I expect that a lot of companies will take note.

This entry was posted on Monday, August 29th, 2011 at 14:30 @646 and is filed under DailyDOOH Update. You can follow any responses to this entry through the RSS 2.0 feed. You can leave a response, or trackback from your own site.