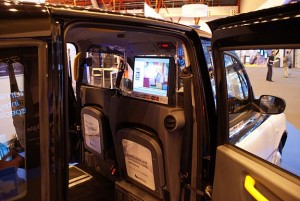 The move is undoubtedly aimed at strengthening VeriFone’s position as a media channel for UK advertisers, allowing clients to combine taxi wraps with in-taxi content on the VeriFone Digital Network (VNET).

The acquisition should also allow closer relationships with Taxi Media’s 6,000 licensed drivers as VeriFone rolls out in-taxi card payment and digital media solutions across the capital and throughout the UK.

Over a third of London’s licensed taxis carry advertising. Taxi Media’s cabs have included ground-breaking campaigns such as turfing cabs for a leading perfume brand for London Fashion Week and encrusting taxi with jewels for a luxury drinks company.

Mark Roberts, Vice President and General Manager, VeriFone Taxi and Media Solutions told us “Taxi Media has been at the forefront of the taxi advertising industry since the medium was first established a decade and a half ago. No one understands the needs of taxi advertisers or drivers better. VeriFone wants to retain the experience, skills and approach which has made Taxi Media a success. Combining the strengths of both businesses creates a dynamic new media organisation that will help take London’s taxis into the digital age.”

Asher Moses, former CEO of Taxi Media was quoted as saying “We have been involved in many exciting advertising projects over the past 15 years. With a global player like VeriFone behind us, we look forward to extending the taxi advertising medium even further – creating new opportunities for our customers, creative partners and drivers. By combining in-taxi digital media with exterior wraps, advertisers will be able to create dynamic campaigns that resonate with an increasingly ‘on-the-go’ urban consumer.”

Former Taxi Media CEO Asher Moses and all existing Taxi Media employees are now part of the VeriFone Media team. They will remain based at their London offices, including the state-of-the-art livery installation centre in the East End.

This entry was posted on Sunday, September 4th, 2011 at 14:58 @665 and is filed under DailyDOOH Update. You can follow any responses to this entry through the RSS 2.0 feed. You can leave a response, or trackback from your own site.