The 5th Munich Digital Signage Conference 2011 got off to a cracking start with the keynote address from Invidis’ now familiar dynamic duo – Florian Rotberg & Oliver Schwede. 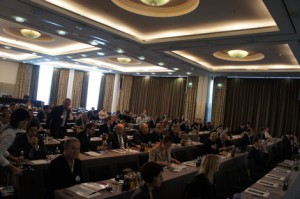 [1]Florian announced visitors from India, Korea and Canada, but the attendance was predominantly German, with more presentations in Goethe’s language than last year. Which is all fine, as it reflects a coming of age of a market which previously struggled with an ‘under-development’ complex.

The theme of the conference was “Beyond the Tipping Point- Managing Growth” which accurately describes the current situation of and challenges for the German market. Whilst observers all had been predicting that one day it will happen, the last 12 months have seen strong growth in Germany, with digital signage evolving from a “nice-to-have” service to a “must-have” service in selected industries. Overall, the business has grown from €273M in 2009 to €330M in 2010 – an increase of 21%. Figures already in for Q1 and Q2 lead Invidis to project €440M for 2011.

Florian took us back through the predictions for 7 Trends in the sector that the duo made last year, indicating that they had actually got 5 out of the 7 quite right:

Invidis has been undertaking intensive in-depth studies of the German-speaking market during the last year, and was able to publish some of it already in the conference programme. The Top 3 Integrators were:

Full details will be available next week, so watch this space.