Last week I made mention in my wrap up speech at #doohbizkonf in Munich that this year had seen an interesting trend of particularly good, regionalised events; Amsterdam’s #DiSCO11, Moscow’s Digital Signage Conference [1], the Digital Signage Trends 2011 [2] event in Poland, #scalaconf (also in Amsterdam) and of course #doohbizkonf itself in Munich. 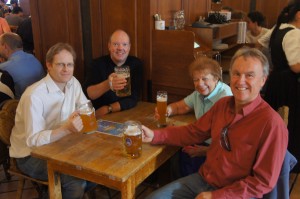 End of a long week. Prost!

They were all incredibly well organised events and EACH attended by several hundred people thirsty for knowledge. With the invidis folks on fine form there’s no reason why #DiSCO12 (the day before #ise2012) will not be as good as previous years and as well as the Moscow and Warsaw events being repeated we know that the trend is likely to continue with events planned, we believe, in places such as Dubai.

Those who didn’t get to Munich (and we didn’t see ANY of the UK networks and operators who attended in previous years) missed out on some great pre-conference and post-conference sessions.

Is their a moral to this story? Yes, as usual. If you want to be part of the industry you need to go out of your way to take part. You need to be involved. You need to ‘care and share’. It’s important to get groups of people together every now and again to discuss how it’s going and how we ALL move forward.

If you didn’t attend you missed out but more importantly the industry MISSED you. Shame.