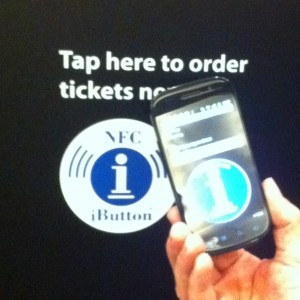 The all day training session gave attendees a thorough explanation of NFC (Near Field Communication) technology and an overview of how it can integrate with existing marketing campaigns to maximize campaign ROI.

Still relatively new to consumers as well as marketers, NFC technology has yet to reach a critical mass of users however Nokia, Samsung, Blackberry & Google have NFC capable smartphones available now. It is estimated that by the year 2014 the US smartphone penetration will be as high as 70%, and with several manufacturers launching devices that support NFC, the technology may soon be a standard feature such as a camera or bluetooth.

Still, a major obstacle that currently prevents NFC technology from becoming mainstream is the lack of POS terminals that support and can accept NFC transactions.

This entry was posted on Wednesday, September 28th, 2011 at 08:14 @385 and is filed under DailyDOOH Update. You can follow any responses to this entry through the RSS 2.0 feed. You can leave a response, or trackback from your own site.