Our look at the month ahead is a bit later than usual, so many stories did we have for you Monday AND as we all, it seems, enter what is surely one of the busiest months of the year for our industry. 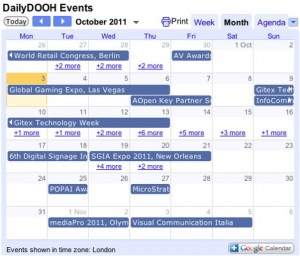 The 6th and 7th October sees the AOpen Key Partner Summit, a private, invite only event in Amsterdam and on Sunday 9th October Gitex Technology Week and the co-located InfoComm Middle East and Africa event kicks off until the 13th in Dubai.

On Wednesday 12th October The Festival of Media LatAm 2011 is being held in Miami which runs until the 14th.

At the end of the month on Tuesday 25th October in London is the POPAI awards and later that same week also in London on the 27th October is MicroStrategy’s London Symposium.

This entry was posted on Monday, October 3rd, 2011 at 18:51 @827 and is filed under DailyDOOH Update. You can follow any responses to this entry through the RSS 2.0 feed. You can leave a response, or trackback from your own site.