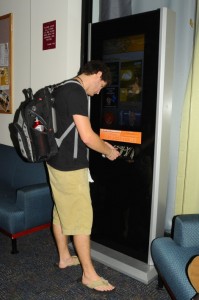 NV3 Kiosk at Towson U.

NV3’s charging kiosks provide a very specific answer to the problem that many people in need of battery power face while outside of their home, dorm or office.

A full 99.8% of students own at least one cellphone, according to a research study conducted by Ball State University. And a second, national survey of approximately 500 students, which has been conducted twice a year since 2005, shows that 49% now have smartphones, compared with 38% in October 2010, and 27% in Feb./09.

“Since installing the NV3 cell-phone charging kiosk in our student union, a very high traffic area right in front of the entrance to our university book store, students have inundated us with positive feedback,” says Ralph Valle, Auxiliary Services, director of marketing and communications, Towson University.

“It’s no secret that today’s college students spend a significant amount of their time, both personal and for their studies, on their smartphone, tablet or other mobile internet computing device. NV3’s kiosk provides them with a very convenient, secure, accessible resource for them to charge their device.”

Thomas Sparrow of Auburn, Alabama, a vendor who placed cell-phone charging kiosks inside Auburn¹s Jordan Hare Stadium, says, “Inside Jordan-Hare stadium where the 2010 BCS National Championship Auburn Tigers play, students and fans are constantly using their mobile devices to update friends on the game, post messages via Twitter and Facebook, or track scores from games around the country, and with that, have low batteries on their devices. With the thousands of visitors to the 87,000 seat Jordan-Hare stadium for every home game, this helps provide an excellent customer service amenity to fans and provides an additional revenue opportunity to the vendor and school.”

NTC floor model kiosks stand 73” high by 30” wide. The dual-screen base unit comes with a 19″ HD LCD screen on top and a 32” HD LCD screen on the bottom. Media content is powered by an internal flashdrive media player for the screens to display media content. (Towson’s screens currently are streaming weather and RSS news feeds, but going forward, are expected to carry a combination of university news and info, as well as ads from local vendors.)

The NTC 1912, NV3¹s desktop charging kiosk, boasts a 19” wide LCD screen with optional touchscreen, weighs only 50 lbs, and is 24″ high x 18.5″ wide . There is an option for remotely managed digital signage for each kiosk model.

NV3¹s kiosks are American-made and provide up to 800 milliamps for a powerful flow of electric current with which to rapidly charge Blackberries, iPhones, iPads, Droids, Nokia, Samsung, LG, Sanyo, Motorola, Sony Ericsson and other widely used devices.

This entry was posted on Wednesday, October 5th, 2011 at 10:01 @459 and is filed under DailyDOOH Update. You can follow any responses to this entry through the RSS 2.0 feed. You can leave a response, or trackback from your own site.