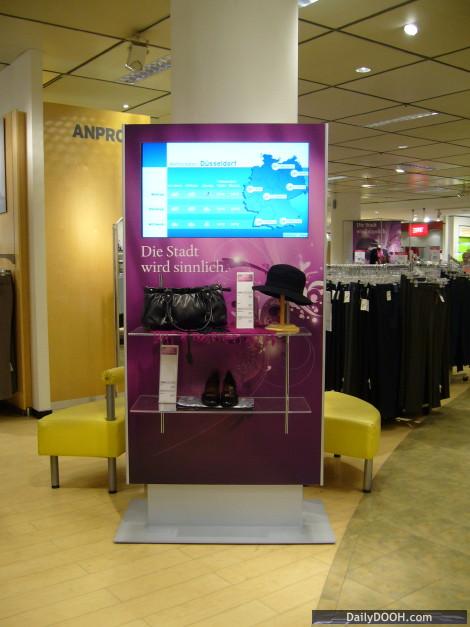 Last year in September 2007 we were one of the first to write about German retailer Karstadt doing an in-store retail digital signage rollout BUT now we hear that not only has the rollout stopped but that they are going to de-install everything that was previously put in!!!

Karstadt and its parent company Arcnador, like many big retailers at the moment is under severe financial pressures.

Even though we believe that the research results from the deployment to date have been reasonably good, internal squabbles – particular those between the purchasing department and others involved in the project, a change of Karstadt senior management and a general lack now of a ‘deployment champion’ have meant the death knell for what was once a nice ambitious project…

The German retailer Karstadt is to install an average of 45 flat screens in about a dozen of their top stores.

The demo system is currently running in Düsseldorf for anyone who wants to go and see it.

There is a rumour that says the rollout may even be as many as 50 stores before Christmas followed by the remaining stores by mid 2008.

If that is the case then 1 million customers could be reached daily.

We are told this is a state of the art rollout, with all the lessons of previous retail deployments learnt – screens in good locations and compelling content.

There are a number of rumours in the market place that Karstadt might be in discussions with some form of vendor consortium who might take over the investment (needs) and then continue the rollout, however we believe this to be highly unlikely as Karstadt’s restrictions / allowances on what is permitted in terms of (external) third party advertising are quite rigid.

Whilst this retreat from Digital Signage by a major (read that as ‘influential’) German retailer is not as bad as the damage done to the retail grocery sector by the early UK Tesco fiasco, make no bones about it, this is definitely a big blow to the German retail Digital Signage market.

This entry was posted on Monday, November 17th, 2008 at 00:18 @054 and is filed under DailyDOOH Update. You can follow any responses to this entry through the RSS 2.0 feed. You can leave a response, or trackback from your own site.