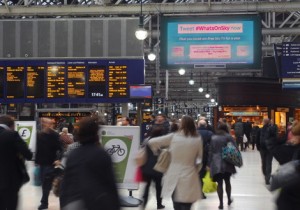 This campaign allows the public to engage directly with Sky using the #whatsonsky hashtag. The campaign was booked with JCDecaux Digital by IPM and MediaCom and social media company Jam.

The screens invite the public to tweet Sky with their programme-related questions: “Tweet #whatsonskynow now and we’ll Tweet you back with something great to watch tonight or record on Sky+”.

The tweets are answered with a recommendation for a programme coming up later that day on Sky, with the response appearing on the billboards. Everyone tweeting in will also be entered into a prize draw, for the chance to win a year’s subscription to Sky.

The campaignis running on Transvision screens between 4pm and 10pm at 16 major rail stations including London’s King Cross, Liverpool Street, Piccadilly and Victoria, as well as Glasgow Central, Birmingham International and Leeds.

This entry was posted on Wednesday, October 5th, 2011 at 12:33 @564 and is filed under DailyDOOH Update. You can follow any responses to this entry through the RSS 2.0 feed. You can leave a response, or trackback from your own site.