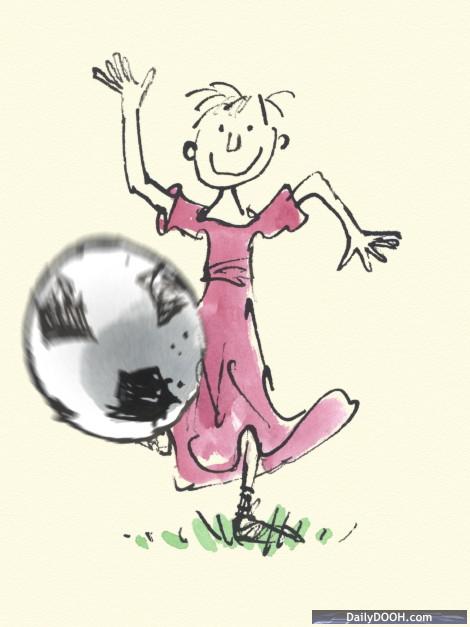 UK publisher HarperCollins is promoting the children’s book ‘The Boy in the Dress’ on CBS Outdoor’s Digital Escalator Panels (DEPs) for two weeks. The campaign broke at the beginning of this week, 17th November.

David Walliams is a famous UK comedian and actor (best known perhaps for ‘Little Britain’ / ‘Little Britain USA’) has signed a two-book deal with HarperCollins, his first, this book ‘The Boy in the Dress’ was published in October and this campaign is obviously designed to capture the Christmas market.

The book was illustrated by Quentin Blake (famous for illustrating Roald Dahl books) [1] and he has created a series of special illustrations for the campaign.

Grand Visual animated these sketches to produce a 10 second multi panel sequence for the DEP environment.

The creative spans 2 screens and shows a boy in a dress taking a running kick at a football. The football shoots across the screens and appears to smash through them towards commuters. 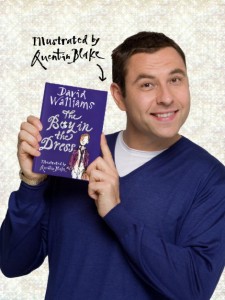 The words “boys will be boys, even in dresses!” then appears on screen followed by the author and comedian David Walliams and a product shot on alternating panels.

We guess it would have been pretty exciting for the folks at Grand Visual to work with such a famous illustrator as Quentin – we bet that doesn’t happen every day.

Quentin Blake, commented: “I am really pleased to have been involved in an innovative campaign that provides a visual evocation of the story and encourages people to think of The Boy in the Dress when they’re looking for a special Christmas present for a child.”

The campaign was booked by OMD and is supported by national PR activity and in-store promotions.