If there ever was a dynamic speaker that kept the audience riveted to their seats, it was Tuesday morning’s keynote speaker at the Strategy Institute’s Digital Signage Investor Conference. 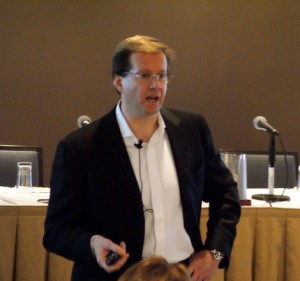 François de Gaspé Beaubien, chairman and chief coaching officer, Zoom Media, Montreal, gave the audience what most attending this conference came for: solid information about what investors are looking for and what you need to do to attract them.

de Gaspé Beaubien first gave a background of other media and what has happened to each, noting that the world has gone away from basic media and is moving at warp speed in terms of changing the way media is consumed. Among the numbers he mentioned, for example, is that 15 billion Apps have been downloaded this year, and that there are around 250 million Tweets a day.

“But there’s a glut of information, often hard to monetize,” said de Gaspé Beaubien. “Consumers today have a different mindset. For example, 44% of U.S. households have a personal TV recorders; 54% of MP3 players are connected in cars. Consumers are time-challenged and they are in control.”

With the facts that the old media model is broken, that advertisers have to reach consumers, and that other media are loosing audience, digital place-based media is well-placed with rising growth, he said. Figures for dollars are estimated to grow from $1.8 billion in 2011 to $3.7 billion in 2015 a rise of 91%.

“Digital place-based media will always be the complementary buy, not the primary buy,” said de Gaspé Beaubien. “It fits into the video vertical planning strategies.”

That being the case, de Gaspé Beaubien unveiled what he considered his Top 10 Reasons for Investors to Consider Investing in Digital Place-Based Media:

“We’re living in an era of consolidation but are into a recession,” he said, also mentioning the integration with mobile and social media as discussed by many speakers during the conference. He called the group of digital place-based, mobility and social as ‘The New Trinity‘.)

de Gaspé Beaubien forecast that, in three years, seven major digital place-based market players will control 80% of the market AND one player will be one who is not yet in the market – but may be in the next six months. And he thinks that a major TV company will be getting into the digital place-based space.

“We’re still in the early days of this business, and there’s not a ton of money going into it,” he said. “The use of mobility in the U.S. is behind that of Europe, but mobility is where there is going to be huge growth.

“And I’m bullish on where this industry is going.”

This entry was posted on Tuesday, October 18th, 2011 at 18:50 @827 and is filed under DailyDOOH Update. You can follow any responses to this entry through the RSS 2.0 feed. You can leave a response, or trackback from your own site.