The DailyDOOH team has to mention the fun we all had at the PRN Upfront party Oct. 18, timely scheduled again this year for the night before the Digital Place-based Advertising Association’s Digital Media Summit. 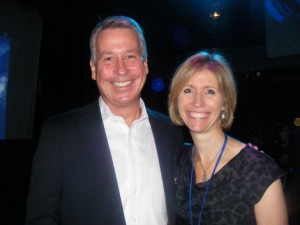 Not only were we lucky enough to get the scoops on San Francisco-based Premier Retail Networks‘ new president and CEO, Ahmed Ouri, and on PRN’s new partnership with ProVision 3D mdia, but we all had cocktails, lots of great food and were entertained by singer/musician Ben Folds.

Further, we were hosted by a large group of friendly PRN staffers and given nice insulated lunch bags filled with a wide assortment of candies to take along home. (Poor Andrew, our biggest eater – candy and otherwise – forgot to pick his up!)

It was a nice break from a heavy work week for us all.

This entry was posted on Thursday, October 20th, 2011 at 05:59 @291 and is filed under Scuttlebut. You can follow any responses to this entry through the RSS 2.0 feed. You can leave a response, or trackback from your own site.