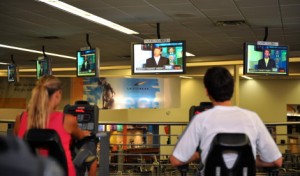 This new inventory also allows RMG to offer brands a localized health club media solution that is targetable by DMA.

“This new partnership with REACH Sports Marketing Group substantially increases the size of RMG’s footprint in the health club media space,” says David Bruce, executive vice-president, media products and partnerships, RMG Networks. “The combined network allows us to deliver over 17 million monthly viewers. Advertisers have repeatedly asked for a health club media product that could be targeted regionally or by DMA and this partnership allows us to provide that.”

REACH is a place-based media company with a digital signage network in 350+ premier recreation and fitness centers across the US.

This entry was posted on Friday, October 21st, 2011 at 00:16 @053 and is filed under DailyDOOH Update. You can follow any responses to this entry through the RSS 2.0 feed. You can leave a response, or trackback from your own site.