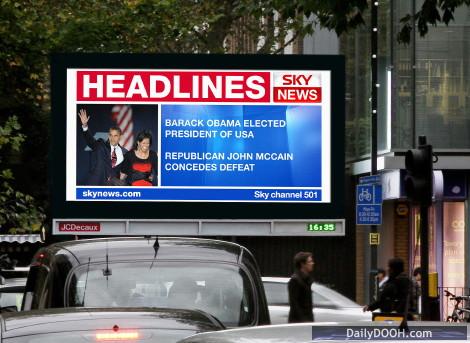 JCDecaux and UK broadcaster Sky launch have just announced a new ‘News Channel’ in London. We saw this ourselves being trialled last week on the Daktronics LED along the Cromwell Road and it has been in test pretty much across the whole PrimeTime digital network during parts of November.

Now though it’s officially live and follows somewhat of a trend at the moment for several of the big UK digital billboards to play catch up with Titan and Clear Channel – we wrote back in September ‘City Gateway Media Sign Deal With Sky News‘ – the Titan Transvision system has had a live news feed for ages of course and Clear Channel’s LG Piccadilly Spectacular screen has been running Sky News for almost 2 years as well.

John Ryley, Head of Sky News told us “This is a great opportunity for the Sky News brand to provide breaking news and top stories in a new environment on roadside Outdoor. We have worked closely with JCDecaux to make sure we deliver the right content, in the right format and always up to date.”

It’s running on JCDecaux’s network of 16 PrimeTime digital billboards and is aiming to be topical, up-to-date and relevant to the roadside audience.

Spencer Berwin, Managing Director of Sales, JCDecaux explained “Our research into digital Outdoor showed that consumers expect to see content on our screens and that the Sky News service would make the latest, breaking news, a daily part of their commute. With roadside being the dominant form of commuting in the capital, London PrimeTime will be a real alternative to The Evening Standard and the Metro.”

It’s sad but true that 55% of London’s commuters travel to work by car. (Source: Touchpoints 2) 🙁

This entry was posted on Tuesday, November 18th, 2008 at 14:35 @649 and is filed under DailyDOOH Update. You can follow any responses to this entry through the RSS 2.0 feed. You can leave a response, or trackback from your own site.