VeriFone A Company To Watch

When François de Gaspé Beaubien, chairman and chief coaching officer, Zoom Media, in his keynote speech at the Strategy Institute’s Digital Signage Investor Conference, forecast that, “in three years, seven major digital place-based market players will control 80% of the market AND one player will be one who is not yet in the market – but may be in the next six months”, we wondered which companies he believed would be in that mix. 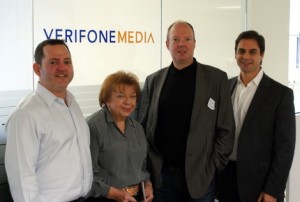 That thought came to mind when the DailyDOOH team visited VeriFone Media Solution’s offices in Manhattan last Thursday morning and we had the opportunity to view the company’s new VNET | TaxiTV and its VNET | At the Pumpofferings.

“We’re the biggest digital media company nobody ever heard of,” said Jason Gross, VeriFone’s director of strategy and marketing.

As a public company, VeriFone has been low key until now but with its new digital offerings, we expect that may be about to change. The DailyDOOH team spent considerable time talking with Gross, Chris Polos, vice-president sales, and also met some of VeriFone’s technical and public relations people.

You may remember that VeriFone acquired Clear Channel’s taxi division which handled advertising sales back in January, 2010 and in September of this year it acquired VeriFone London-based Taxi Media (with its management team and staff becoming part of VeriFone Media).

VeriFone has screens in 6,800 of New York’s 13,000 taxis and now handles the content and advertising sales for both its screens and those of the 6,500 taxis with screens from Creative Mobile Technologies. (VeriFone also has screens and software in about 5,000 cabs spread across the U.S. in Boston, Chicago, Miami, Atlanta, San Francisco and the D.C. area, and it handles the payment systems in many more.)

VeriFone has just upgraded the software for its NYC screens which, as of 25th October carry a second channel along with ABC. The second channel is specifically for New York City, and will run news of city events, entertainment and other information of interest to both residents and tourists.

“Research has shown us that there’s about 50% advertising recall by people riding in cabs, and that goes up to about 80% by people who take cabs four or five times a week,” said Polos.

About 60,000 gas stations across the U.S. also use VeriFone hardware for their payment systems. Now VeriFone has upgraded the software in 750 screens in 75 stations so that the screens also can run media advertising – I believe that Birmingham, Michigan-based Gas Station TV Media and Outcast/PumpTop TV in the US, and Amscreen in Europe will shortly be getting a lot of competition from VNET | At the Pump, Ed.

All in all, we were pretty impressed!

This entry was posted on Wednesday, October 26th, 2011 at 06:57 @331 and is filed under DailyDOOH Update. You can follow any responses to this entry through the RSS 2.0 feed. You can leave a response, or trackback from your own site.