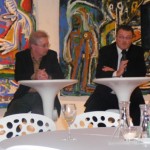 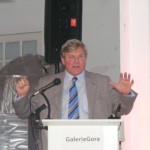 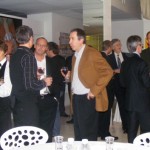 It was well attended (50+) with some good speakers – the pictures above show left to right David Haynes (sales director, BroadSign) and Claude Sénéchal (vice-president sales and marketing, Intello Technologies) taking part in a Q&A panel, Lyle Bunn (consultant and ‘strategy architect’ who made a great presentation) and some of the crowd enjoying pre-conference cocktail (you can see Denys Lavigne, event organiser on the far right of this picture standing in front of a picture).

The event was covered on our behalf by Gail, our Canadian correspondent who will write up something tomorrow on the presentations themselves but just briefly…

Oh and I was also described as ‘pompous’ !!!

Based on the definitions of pompous on the Web I will have to plead “guilty as charged your honour” which is probably what a certain Mr. Petters will be saying shortly as well before spending the next 20 years of his life in jail…

This entry was posted on Wednesday, November 19th, 2008 at 07:48 @366 and is filed under Scuttlebut. You can follow any responses to this entry through the RSS 2.0 feed. You can leave a response, or trackback from your own site.