As we reported last month [1], Gerard Bucas, Scala’s CEO since July, 2002, will officially be stepping down today and handing over the reins to new CEO Tom Nix. 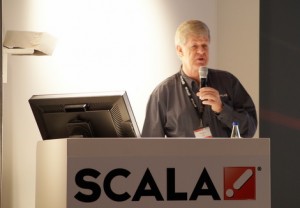 There have not been that many ‘orderly transfers of power’ in the Digital Signage industry, so we felt this was a story worth covering in a little more detail.

According to Andreas Ugland, Scala’s largest shareholder, Bucas literally saved the company from bankruptcy back in July, 2002 [3]. Bucas immediately set about restructuring the company and reduced Scala’s headcount to a low of 27 employees worldwide at the end of 2002.

From that low-point, Bucas literally engineered an incredibly impressive turnaround and today the company employs 27 employees in its Indian subsidiary alone! In eight out of the nine years under Bucas’ leadership Scala generated positive EBITDA.

We are often the first to beat up on Scala but two of the major assets it has going for it are both down to Bucas: –

Scala’s channel is the envy of all of its competitors and no doubt that is one of the reasons why we hear that 2011 year-to-date sales at Scala are now at record highs (surely another remarkable achievement given the current economic woes around the world).

Scala has a lot more to do (and now that is Tom Nix’s challenge [4]) but as the most visible Digital Signage software supplier in the world and, with an impressive global footprint that includes offices in the USA, India, Netherlands, France, Norway, Sweden, Japan, Canada and full-time employees in a number of additional countries, he has (thanks to Bucas) a good starting point.

It’s hard to believe that in the eight years prior to Bucas’ appointment as CEO, Scala had in fact four different CEO’s, each of which (seemingly) consumed millions of dollars in investor funds.

As no new equity has been raised since 2002, it’s safe to say that all of Scala’s growth since then has been funded from internally generated cash flow.

Over the years (and despite our own ‘differences’ with Scala and its management), we have only ever heard good things about Gerard – from his employees, and from Scala’s customers and competitors alike.

The industry, it seems, regards him as one of the nice guys in the business. He will be sorely missed and we wish him well with his future endeavours.

Gerard tells us that he can be contacted on his personal email address at gerard@bucas.net

2 Comments To "Scala’s Changing Of The Guard"

Gerard is definitely one of the good guys. Scala would not exist now without his SIGNIFICANT contribution over the last decade. Tom Nix has big shoes to fill, but I suspect and hope he is up to the challenge.