We heard a nice little story about a Watchfire [1] Board and how people get attached to their digital signs that we think is worth sharing. 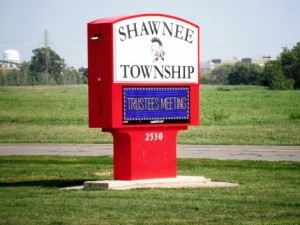 [2]The Shawnee Township [3] complex near Lima, Ohio, houses police, fire, dispatch, roads, and administration, and it was decided that its traditional wooden letter board should be replaced with a new LED sign. After researching different sign companies, it was decided that a Watchfire digital LED sign was exactly what was needed.

The board of directors saw that an LED sign would benefit the Township in two ways: the sign would allow it to quickly and easily communicate important messages to the residents, and it would reduce the number of calls the administration office receives with questions about things like brush pick-up, fire hydrant maintenance, policies and more.

The sign went up in Sept., 2010, and it was considered a success in the community of a little over 12,000 population. Within a short time, there were more than 100 calls from residents complimenting it. It was also so easy to program and change messages, which was a huge benefit.

However, on Jan. 25, 2011, Shawnee Township lost its sign to an auto accident. The sign was totaled, and repair wasn’t an option. After the accident took out the sign, people started calling wondering where the sign was. Some people even commented on the township’s new Facebook page. One woman wrote, “Sure miss that sign….”

The Township Board decided to ‘turn lemons into lemonade’ and upgraded the totaled sign with an even bigger Watchfire sign. On April 5, 2011, the second sign went up and reaction has been great.

The main goal of the sign was to reach more people with messages about township information and events, and the sign delivers.