We’ve known this was coming for quite a while, so it’s nice to see that the official launch of the FELT Lab [1] finally took place last Wednesday in Waterloo, Ont., one of Canada’s major tech hubs. 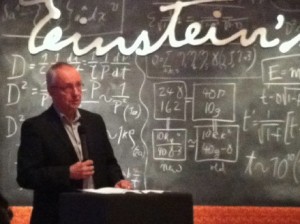 The new digital media laboratory will strengthen Waterloo Region’s reputation as a national innovation corridor while teaching the next generation of entrepreneurs how to design, build and commercialize interactive displays that anticipate and meet real-world needs.

FELT, named for its home in an old felt manufacturing facility, is a digital sandbox for serious play. The lab provides a venue for University of Waterloo students to gain intensive, hands-on experience that involves taking an idea from conception to creation to adoption.

“The future belongs to those who can combine design thinking with technological innovation and business entrepreneurship,” says Dave Goodwin, a Waterloo professor and founder of REAP. “This is REAP’s mission: to provide University of Waterloo students with leading-edge technologies, research funding, industry mentors, and real market opportunities, and then to support them as they commercialize their innovative ideas and spin off new businesses. the FELT Lab is a game-changer.”

At the launch, students demonstrated various applications and uses for the new technology that support their projects. A demonstration of the technology offered by a company named Apptui showcased an application that allows smartphones with an Internet connection to become a controller and receiver for an enabled digital display device. 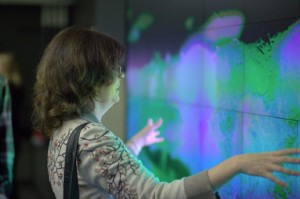 Other installations included a display that uses award-winning Christie MicroTiles: a modular, scalable and digital display technology that produces a virtually seamless canvas with an unlimited number of super-fine pixels and stunning range of colours. It was used to showcase Float4 Interactive’s innovative touch- and motion-based interactivity.

Angela Quayle, an innovation consultant from Silicon Valley, delivered the keynote address, and Bob Rushby, former CTO of Christie (and co-inventor of Christie MicroTiles), along with REAP students were on hand to share insights from FELT Lab and its potential impact on IDEAs (interactive display environments and applications).

Rushby has remained actively engaged with the REAP program following his retirement from Christie. His appreciation for REAP’s unique research entrepreneurship model led him to become the first FELT innovator-in-residence. He will continue to foster an environment that departs from the traditional lab-to-patent concept by working with students to find new applications of, and uses for, emerging technologies.