VeriFone Media, already a major force in the taxi media world (see our Oct. 26 article) , extended its footprint much wider this week with the purchase of Show Media’s taxi-top business, adding 3,000 taxi-tops to VeriFone Media’s existing 6,800 taxi-tops in New York and another 100 to its 500 taxi-tops in Miami.

With this acquisition comes the patent for Show Media’s larger and brighter High Impact Tops which will be rolled out further by VeriFone Media.

And, while all the taxi-tops are currently LED backlits, we’ve learned that Verifone Media is currently examining and evaluating technologies that will allow digital taxi-tops to show up on its properties, likely within the next six months.

Further, in the UK, where VeriFone has 6,000 taxi exteriors in its portfolio, there’s a push on to add this type of product to London cabs, so we expect to see VeriFone Media’s taxi-top products to move into that market.

“In total, VeriFone Media now has 25,000 taxi-tops and wraps in cities across the U.S., including the now close to 10,000 in New York,” says Chris Polos, vice-president sales, VeriFone Media. Polos says that VeriFone Media will probably be taking on some of Show Media’s operations staff.

In addition to the taxi-tops and wraps, of course, is VeriFone Media’s VNET-TaxiTV. The company handles 6,800 in-taxi VeriFone payments/digital equipment in NY and also manages that of the 6,500 CMT taxi digital screens. It also has more than 30,000 taxi payments systems in the rest of the US (in addition to New York’s), and over 5,000 of these 30,000 are currently digital media-enabled.

And added to these are more than 2,000 taxi payments systems currently installed in UK, plus 1,500 digital media-enabled in London. Both are growing quickly. 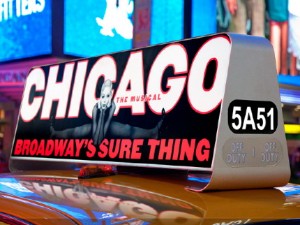 The purchase certainly makes VeriFone Media the biggest player in the taxi media business in New York, where its advertising sales staff will have an even larger platform to sell.

“This gives us more scale, a larger platform, and a chance to innovate,” says Jason Gross, Verifone Media’s director of strategy and marketing.

And we don’t expect this fast-growing company to sit back and relax.

“While we have the opportunity for great organic growth, we’re always on the lookout for other strategic and complementary opportunities,” says Gross.

Show Media will still operate its promotion and events business as a separate company which was not involved in the VeriFone acquisition.

This entry was posted on Wednesday, November 2nd, 2011 at 16:53 @745 and is filed under DailyDOOH Update. You can follow any responses to this entry through the RSS 2.0 feed. You can leave a response, or trackback from your own site.