New York-based Inwindow Outdoor, working with CBS Outdoor, has created a campaign in the Columbus Circle subway station in New York City featuring a 60’ long video wall running the length of the corridor. 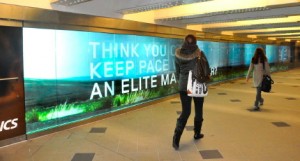 The campaign is designed to promote this weekend’s New York City Marathon and Asics running apparel. Viewers who approach the screen see a looping video that begins with shots of the five boroughs of New York City and a map of the Marathon route. The next phase of the video features a countdown followed by the image of famed long distance runner Ryan Hall running the length of the video board at marathon pace.

The campaign, which will run through the end of November, represents an expansion of Inwindow’s reach beyond malls and street-level retail.

This entry was posted on Saturday, November 5th, 2011 at 07:55 @371 and is filed under Scuttlebut. You can follow any responses to this entry through the RSS 2.0 feed. You can leave a response, or trackback from your own site.