Several book deadlines meant that none of our team could get up to Manchester today [1] for The Screen’s usually very good series of Breakfast Briefings. 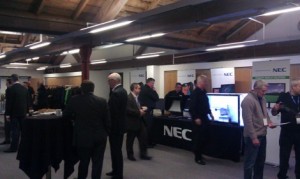 By all reports it was a very well attended event with just over 100 folks in attendance. Now whilst this may have been buoyed by a whole lot of NEC invitees – the NEC Northern Competence Dayis being held at the same time – getting one hundred folks to any regional event is not to be sniffed at.

Attendees were welcomed by Richard Cobbold before the opening presentation from Tony Hill, museum director with some fascinating facts about industry in Manchester such as the recent development of graphene [3], the World’s strongest, thinnest material, here in Manchester. 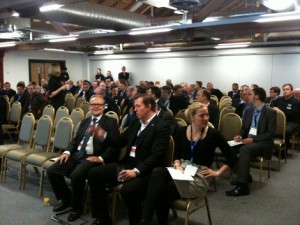 Tony also mentioned the partnership with NEC, who were (as mentioned earlier) out in force for a full days programme at the museum.

Tony praised NEC and PSCo who he said had “revolutionised the museum with screens and interactivity installed throughout MOSI”. He also made mention that this had increased customer satisfaction levels to 4.8 / 5 for the visitor experience.

Our spies tell us that Scala’s Damon Crowhurst was sporting a fine Movember [5] effort and that whilst people from Clear Channel, City Gateway Media and Eye Corporation were in attendance there were few other OOH faces that we would have known.

All in all though a good attempt at moving the BreakFast Briefings out of London.