Hocus Pocus Media Has No Proof Of Play

Focus Media have attempted to respond to all of the allegations raised by Muddy Waters with a very detailed press release (summarised in part below) and a conference call (in both English and Chinese) which we tried our best to follow on Tuesday. 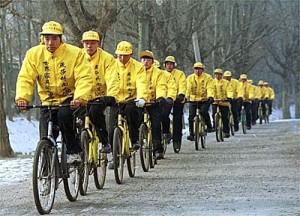 As usual with these sorts of conference calls, the best bits are always the Q+A sessions when the company spokesperson stops their spiel and the moderator / operator opens the floor to those on the call to ask their questions.

Questions that came in were of the sort…

“Has there been any response from advertisers after the allegations?”
“What reports do you give advertisers on an ongoing basis?”
“What measures will you take legally to protect your name?”
“How long will it take to compile the audit report?”
“How will you compile such an audit report?”
“Have you been contacted by any ‘regulators’ since the allegations?”
“Describe your incentive scheme for your board of directors”
“Will there be any changes to your board structure?”

For us of course the most interesting were those involving proof-of-play and in fact at the end of the conference call our team turned to each other and agreed that what all of the fuss has been about (yes, you guessed it) is proof-of-play!

Focus did say that there had been no impact to customers (by which they mean advertisers) but as this all kicked off yesterday it would be far too early for any advertisers to start pulling their ads or complaining that they weren’t getting what they thought they were paying for.

Focus also said that they ‘sometimes’ use Nielsen with regard to reports they give back to advertisers. This was perhaps the biggest surprise to us in the whole call (and in fact in the whole debacle). If Focus had to hand a trustworthy, third party audit report or measures in place for proof-of-play none of this need have happened.

There is a lesson here for ALL advertising funded networks!

Focus in the press release and in the conference call went into much detail about their screen numbers, we quote “The LCD screen allegations unfounded and misunderstand the Company’s business”.

The Muddy Waters report of course alleged that Focus Media has overstated the number of LCD screens in its LCD display advertising network and made false claims about the location and type of buildings in which its screens are placed.

Focus said “The Report’s allegation regarding the number of LCD display network screens in the Company’s network is incorrect and reflects a misunderstanding in the types of devices used by the Company and their method of calculation”.

The latter two types of which are devices distinct from, and not calculated in the number of, the picture frames used in the Company’s poster frame network as of September 30, 2011.

That’s 178,382 screens and Focus were at pains to say that those responsible for compiling the Report (that will be Muddy Waters then) based their calculation entirely on the number of basic LCD screens, and ignored the digital screens and LCD picture frame devices – erroneously we are told, believing the latter two to be part of the Company’s picture frame network.

The poster frame network – which is distinct from and not double-counted with the LCD network described above – consists of:-

The in-store network consists of 50,696 LCD screens as of September 30, 2011, which is in addition to the screens in the LCD display network and the poster frame network.

The rate card applicable to each of these media types, we are told, are different and the Company’s advertising contract terms specify a building list as well as media type for each customer contract signed.

Interestingly, Focus Media said that it would recommend to its audit committee that it engage a third-party survey firm to conduct an independent accounting of its LCD, poster frame and in-store networks to confirm the Company’s claims. If that has never been done before there seems to be something wrong surely?

Anyway, one early caller (a Mr. John Shaw) asked on the conference call how this (audit report) would be carried out and how long it would take before a report was ready. In our opinion the question was NOT answered (no information was given as to HOW this would be carried out) but the spokesperson did say that the report will be ready in two weeks.

The rest of the press release and much of the conference call related to the allegations relating to historical acquisitions, impairment charges and write-offs all of which Focus Media said “impugn the motives of management without foundation or basis”.

This entry was posted on Wednesday, November 23rd, 2011 at 15:45 @698 and is filed under Scuttlebut. You can follow any responses to this entry through the RSS 2.0 feed. You can leave a response, or trackback from your own site.

2 Responses to “Hocus Pocus Media Has No Proof Of Play”