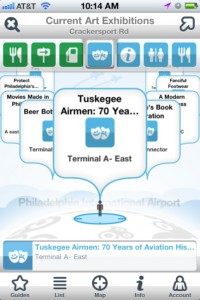 Co-developed with Geodelic, a Santa Monica-based tech start-up, and launched in August 2010, FLYsmart has since added several airports to its growing national network, including Fort Lauderdale-Hollywood International Airport and Sacramento International Airport. As part of the Geodelic network, the app is accessible to more than one million users and is now available across 34 of North America’s largest airports:

Outside the airport, FLYsmart acts as a location discovery guide, enabling users to access information on hotels and services in the area and provide added details on local attractions in destination cities.

“FLYsmart was developed to navigate the travel experience with ease – especially during the hustle and bustle of the holidays.” says Toby Sturek, president of Clear Channel Airports. “Not only does FLYsmart put the most essential airport information right at user’s fingertips, the app has also become a gateway to local culture with the introduction of our latest Art Exhibition feature.”

Philadelphia International Airport is among the visionary airports unveiling the creative possibilities for fine art in unconventional locations, outside of museums and galleries. The airport is the first to take advantage of FLYsmart’s new feature that showcases public airport art, and provides capsule descriptions and locations of current art exhibits. One of Philadelphia International Airport’s premier exhibitions highlighted in the FLYsmart app is the “Tuskegee Airmen: 70 Years of Aviation History” exhibit. It is more than 15 curated exhibitions that are on display throughout the airport, providing a rewarding cultural experience among travelers.

Philadelphia International Airport also recently revealed a large-scale installation, dubbed ‘How Philly Moves’, the details of which can be found in-app. The 85,000-square-foot mural by photographer Jacques-Jean Tiziou, set on the parking garages for Terminal B-C Baggage Claim, incorporates the images of 26 Philadelphians dancing.

“FLYsmart is an amazing app,” says Mark Gale, CEO, Philadelphia International Airport. “I use it on my iPhone. We are excited that travelers can use this tool to get around PHL, and we are proud to be the first airport to take advantage of the Airport Art Exhibitions feature that allows travelers to enjoy our fascinating Exhibitions Program.”

This entry was posted on Wednesday, November 23rd, 2011 at 09:59 @457 and is filed under Scuttlebut. You can follow any responses to this entry through the RSS 2.0 feed. You can leave a response, or trackback from your own site.