Ocean Outdoor has been named Outdoor Sales Team of the Year at the Campaign Media Awards, beating industry giants JCDecaux and Clear Channel to the title. 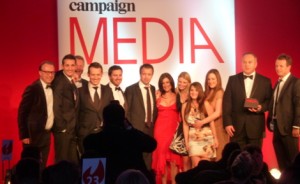 The award judging panel said they were impressed how a relatively smaller company had held its own in what is regarded to be a pretty tough marketplace.

“This is an outstanding achievement for a company of our size in a market dominated by global organisations and a testament to a lot of hard work and incredible team spirit across the last 18 months,” said Ocean Outdoor’s Iain Chapman.

Ocean Outdoor Marketing Director Richard Malton said: “It is an honour to be recognised as one of the media owners at the forefront of selling the medium. It’s not just a matter of our products and marketing, we have a team which is using the unique Ocean proposition to steal a share of other media.”

Against a flat market, this year Ocean has seen an increase in the number of brands it serves and a rise in spend and occupancy across its inventory. Last month,

Ocean Outdoor also picked up a silver medal at the Media Week Awards for Media Brand of the Year.

This entry was posted on Friday, November 25th, 2011 at 07:00 @333 and is filed under Scuttlebut. You can follow any responses to this entry through the RSS 2.0 feed. You can leave a response, or trackback from your own site.