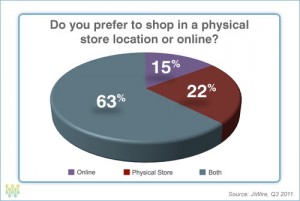 “We pull from different data sources to give us snapshots every three months, and right now the focus is on location,” says David Staas, JiWire vice-president marketing. “People want to know about consumer behavior and how their location affects their purchasing decisions. This is considered a valuable resource for advertisers and agencies. Everyone likes to learn something new. It helps them explain their decisions and gives them topics to brainstorm.”

This quarter’s report uncovers several key emerging trends in the location and mobile markets that include the following:

In the midst of the U.S. holiday shopping season, the study looks at mobile-shopping behaviors between genders and also highlights consumer attitudes toward shopping online versus in store. Male consumers surpassed female consumers in the shopping department – 73% of males make purchases on their mobile devices compared to 61% of females. A consumer’s proximity to a store significantly influences purchasing behaviors as well.

“We know that, for purchasing luxury goods such as expensive jewelry, people want to actually go into a store to see the product, so we looked at how people act when, says, only a $50 item is in their plans to buy,” says Staas. “Location really does play a role.”

Sixty-six percent of consumers prefer shopping for a $50 dollar item at a regularly visited store if within five miles; however, when the same consumers are 20 miles outside of the same store, 72% prefer making purchases on their laptop and mobile devices.

“While consumers are increasingly using mobile to research and make purchases, we are seeing that the in-store shopping experience is equally if not more important, even with a tech-savvy audience,” says Staas. “This holiday season, brands have a great opportunity to not only leverage digital and mobile, but also execute ‘clicks-to-bricks’ approaches to drive in-store traffic, utilizing location and proximity to deliver the right advertising experience.” 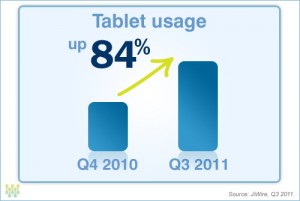 As people continue to become increasingly mobile and strive for constant connectivity, mobile-device habits have shifted from larger devices like laptops to smaller, more portable devices such as smartphones and tablets. Tablet usage has nearly doubled in the past year, growing by 84% since Q4 2010. Since last quarter, tablets and smartphones are showing relative growth in usage while other devices like netbooks and laptops have remained stable or declined. Tablet usage is up 20%, smartphone usage is up 24%and by comparison, laptop usage is down 10%.

Other key findings include:

Since inception, tablets continue to gain popularity with on-the-go consumers, having nearly doubled in growth over the past year. The study determined that the tablet audience is very comfortable making purchases on their device, purchasing items more frequently than just smartphone owners, and often spending more. For example, 82% of the tablet audience is willing to make purchases directly on their mobile devices – either their smartphones or tablets – compared with 76% of smartphone owners.

“In general everyone has a smart phone, but, as they purchase their tablets, it changes their habits,” says Staas. “Tablets have bigger screens; they’re easier to use; and they’re closer to computers that people are familiar with.”

Other purchase preferences include the following: 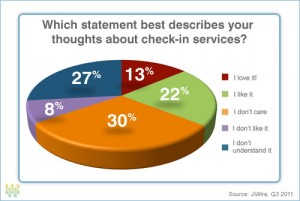 Despite all the attention and focus on ‘checking in’, (eg. to social media such as foursquare) the jury is still out when it comes to consumer attitudes around this component of location media. In fact, consumers are split three ways: 35% feel positive toward it, 35% either do not like it or understand it, while 30% do not care about checking in. Additionally, the primary drivers of this trend appear to be among males. For example, 39% of males claim that they ‘like’ or ‘love’ checking in while only 30% of women feel that way about checking in. Not surprising, the most popular check-in categories are restaurants, hotels, pubs/bars and health clubs.

The iPad, Android and Windows Mobile 7 are continuing to gain market share both in the U.S. and in the U.K., while market share continues to decrease when it comes to the iPhone and iPod Touch in both countries.

Additionally, the U.S. and U.K. both saw a drop in market share with the iOS – but in both cases, it’s still #1.

This entry was posted on Tuesday, December 6th, 2011 at 15:30 @687 and is filed under DailyDOOH Update. You can follow any responses to this entry through the RSS 2.0 feed. You can leave a response, or trackback from your own site.