London Is N1 For Shopping

If in the coming weeks you are out doing your last minute Christmas shopping in London and wonder how there could be so many people out and about doing the same thing, here is a tip. The Globe Shopper City Index – Europe, a new Economist Intelligence Unit (EIU) research program, sponsored by Global Blue, says that London is the best city to shop. The EIU’s Globe Shopper City Index – Europe measures the attractiveness of 33 major European cities for international travel shopping. Each city was ranked according to 38 criteria grouped into five categories: shops, affordability, convenience, hotels and transport, and culture and climate. 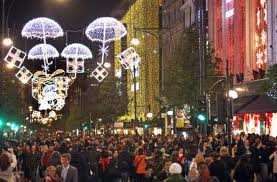 Global Blue is a company that specializes in international shopping and spending around the world, providing brands with consultancy, intelligence and marketing services.  “The Globe Shopper City Index – Europe is a significant step in Global Blue’s strategy to become the go-to brand for everything to do with international shopping and spending around the world,” says Per Setterberg, CEO of Global Blue. “This Index will help retailers and shopping brands make better business decisions, while the online Globe Shopper City Index will enable travellers to discover their ideal shopping city based on their personal priorities.”

London’s variety of shopping districts and availability of goods earned it the best category score of 80.6 points out of 100. The research also recognised London’s excellent selection of cultural attractions available to tourists when taking a break from their shopping. The ‘Big Smoke’ also took the pole position for being accessible. In 2010, the city had the most annual passenger flights of any Index city, at 950,000, which is nearly four times the Index average of 240,000, and 200,000 more than the next city on the list, Paris.

The biggest drawback for London, according to the Index, is its high prices. Whilst the price of goods are reasonable, with London ranked in the top third of the Index, it ranks 32 out of 33 for the average cost of  two-star and four-star hotel rooms, and came 25 for the cost of taxis and buses.

The Index also picked up on London’s less than straight-forward visa regime and the city’s world-famous rainy weather.

This entry was posted on Friday, December 9th, 2011 at 11:30 @521 and is filed under DailyDOOH Update. You can follow any responses to this entry through the RSS 2.0 feed. You can leave a response, or trackback from your own site.