ESPN, launching its 2011/12 advertising campaign to promote live televised coverage of the 2011-12 FA Cup, is opening the campaign Dec. 28 across the U.K. initially on key outdoor sites, including digital sites, before any other media. 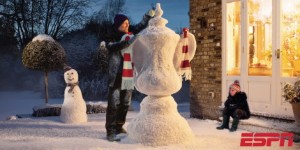 Beginning ahead of the key Third Round, the campaign draws on ESPN’s Cup of Dreams marketing positioning of the FA Cup. The Cup of Dreams plays on the notion that as the oldest and greatest club knock-out competition in the world, the FA Cup is ‘The Cup of Dreams’, where non-league teams dream of ‘killing a giant’; strikers dream of scoring in the final; and every fan of every team dares to dream of winning.

This season’s campaign revolves around the idea that fans have a unique obsession with the FA Cup, a connection unlike any other sporting passion: that when their team is on a Cup run, or, has giant-killing moment, that this obsession permeates the everyday thoughts and activities in life, often influencing what they say and do at home, work or leisure.

SnowMan will kick off the campaign on key outdoor sites nationwide ahead of the key Third Round. It will appear online around New Year’s Eve and in print from the weekend of the Third Round. All other creative executions will begin from Round Four onwards.

Mike McKibbin, group marketing director, ESPN Europe, Middle East and Africa, says, “Sports fans aren’t passive viewers. We understand that and want to connect with fans through this campaign. We aim to demonstrate our understanding of the FA Cup, its unique appeal and fans’ passion towards it.”

On ESPN TV this season, the broadcaster will continue to promote the competition with a series of 10 on-air promos that each feature ‘everyman’ goal scorers who are now pursuing occupations outside of football.

Arena Media handled the planning/ and buying for the campaign.

This entry was posted on Friday, December 9th, 2011 at 10:00 @458 and is filed under Scuttlebut. You can follow any responses to this entry through the RSS 2.0 feed. You can leave a response, or trackback from your own site.