No, this doesn’t involve DOOH screens, but it does involve Clear Channel Airports [1], marketer of airport advertising and a division of one of the world’s largest outdoor advertising companies, Clear Channel Outdoor Holdings [2], Inc. – and besides, we happen to like the TV show involved! 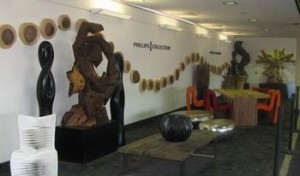 Phillips Collection partnered with Clear Channel Airports to showcase its striking furniture designs and home accessories in an exhibit located in the South Concourse of Piedmont Airport recently. It happened that a team of designers from ‘Extreme Makeover – Home Edition’ were traveling through PTI and took notice of CCA’s Phillips Collection display. The design team then visited the Phillips Collection headquarters in High Point to hunt for pieces for use in an upcoming two-part episode.

The episodes followed the Extreme Makeover team as they traveled to Maryland to help the family of a teen, who lost his hand in an accident and has given to his family and community in many selfless ways. In a race against time on a project that would ordinarily take months to achieve, the team of designers, along with hundreds of workmen and area volunteers, have just a few short days to completely renovate an entire house.

The Phillips Collection enhanced the Johnson-Goslee Family’s home environment in the episodes which aired Dec.9/11, and Clear Channel management says that it showcased the effective role that airport advertising plays in the overall media landscape.

The North Concourse exhibit will be viewable starting December 23.