We are told that tomorrow (Thursday 15th December) will be the busiest night of the year for taxi drivers in London and 118 118 is giving away free cab rides in the capital (in zones 1 and 2 between 6 PM and midnight). 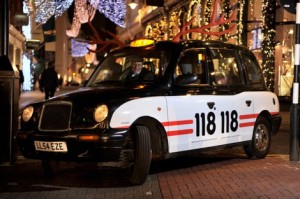 The advertising campaign to support the event has a strong Facebook element and is utilising digital panels on the underground as well as newspaper ads and taxis that have been skinned by Ubiquitous (and even have big red antlers on).

There are ten taxis in all which have been emblazoned with the memorable number. Anyone lucky to flag one down will get a free ride to anywhere in zones 1 and 2!

The initiative will be featured in press ads in The Metro and on tube escalator panels on December 15th.

The Facebook app gives people the chance to win rides in the branded cabs in the run up to Christmas by dropping a pin to show where they’d like to be picked up from www.Facebook.com/118thenumber.

The taxis have been provided by taxi advertising specialists Ubiquitous, who have managed the branding of the cabs and recruitment of the drivers for the stunt.

Creative is by The Brooklyn Brothers and media buying by Zenithmedia.

This entry was posted on Wednesday, December 14th, 2011 at 10:39 @485 and is filed under Scuttlebut. You can follow any responses to this entry through the RSS 2.0 feed. You can leave a response, or trackback from your own site.